Frequency counters, field strength meters and other test equipment have long been standard issue among amateur radio operators. With the recent..

Frequency counters, field strength meters and other test equipment have long been standard issue among amateur radio operators. With the recent availability of advanced, professional grade GMRS radios with higher power and functionality than the typical bubble pack models, the demand for such test equipment has all but exploded. Considering this, Buy Two Way Radios is now an authorized Surecom dealer!

Surecom test equipment is used by radio professionals, hobbyists and bench techs around the world. They manufacture a line of antenna analyzers, field strength meters, frequency counters and other products used for testing and tweaking radio equipment.

It is important to note that some of the products on the list below are designed to be used with analog two way radios only. They are not recommended for use with DMR digital radios. 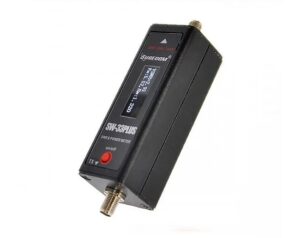 Surecom SW-33 Plus SWR/Power Meter The SW-33 Plus is a popular mini power and SWR meter commonly used to measure the transmit power of portable handheld radios. This compact unit fits in the palm of your hand and fits in a pocket, so you can test your ht radio practically anywhere, anytime.

The SW-33 Plus is easy to install on a handheld and includes both SMA and BNC adapters to work with a wide variety of walkie talkie antennas. It measures frequencies between 125-525MHz, which covers both the 70cm UHF and 2 meter VHF ham bands, as well as frequencies used by the business, GMRS and MURS radio services. It can check antenna SWR within 3 seconds and has a maximum measurable power range up to 100W. It has a built-in battery that can be charged via micro USB and includes a 5-20W dummy load for testing. Price: $39.99 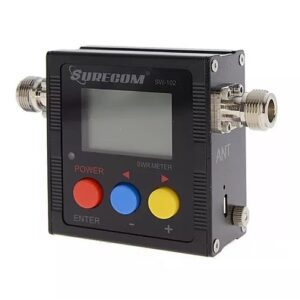 Surecom SW-102 SWR/Power Meter w/ Ground Plane
The SW-102 measures forward and reflected power on a digital readout without any calibration. It can measure frequencies between 125-525MHz with a power measurement range between a half a watt and 120 watts. Although larger than the SW-33, it is also a fairly small and lightweight unit that can be carried and used anywhere. It can also be permanently connected to a mobile radio, if needed.

The Surecom SW-102 resolves that by including a special metal plate to create a ground plane. This metal ground plane plate allows for more accurate testing of handheld radio antennas to achieve optimal results. Also, this tester is designed with an N-connector to ensure the least amount of loss when testing. Optional adapters are available to connect it to radios and antennas using PL-259 (UHF Male) and SMA connectors. Price: $54.99 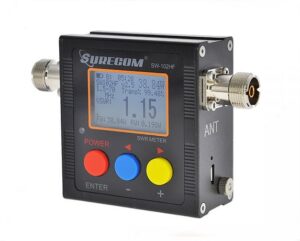 Surecom SW-102HF SWR/Power Meter The SW-102HF is nearly identical to the SW-102, except it is specifically designed for use with HF radios.

It measures frequencies between 1.5-70MHz with a power range between a half a watt and 120 watts, plus or minus 5%. The three button panel is simple to use and the backlit LCD displays S.W.R, F.W, R.W, and battery Level. The built-in interface for both input and output is a UHF Female (SO-239) connector. Also, unlike the SW-102, this tester does not include a metal ground plane plate, as it is intended for mobile and base station HF radios.

Although it is quite portable, it's modular design allows it to be connected permanently to the radio if desired. Price: $59.99 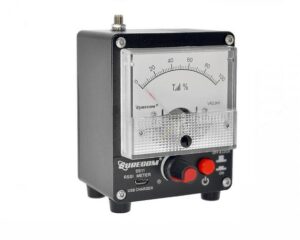 Surecom SS11 Field Strength / Power Test Meter
The SS11 reads the relative field strength from your antenna. It has a frequency range of 100KHz-3GHz and maximum RF Sensitivity of -40.97dbmv or decibel-millivolts. It features a large analog power meter and two simple controls. It also has a micro USB port to charge the built-in 400mah li-ion battery. 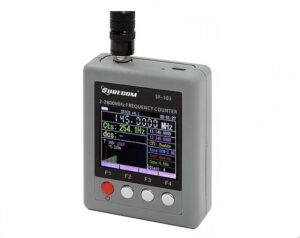 Surecom SF-103 Frequency Counter
The SF-103 is a portable handheld frequency counter for the easy identification of radio frequencies. It can detect frequencies between 2 MHz and 2.8GHz. It is capable of decoding CTCSS tones and DCS codes. It can also be used for measuring signal strength.

The SF-103 features a color TFT or Thin-Film-Transistor LCD display with an adjustable backlight. It also has a simple four button control panel on the front of the unit. It has a Frequency Response time of 0.2-0.5 seconds and a CTCSS/DCS detection time of >0.5-1 second. It includes an auto power off feature that is adjustable between 1 and 9 minutes. Unlike some of the Surecom products previously mentioned, the SF-103 has a digital mode for DMR radios.

This unit includes an antenna and a belt clip, so you can carry it around at your hip. In all, it's a handy little device. Price: $59.99 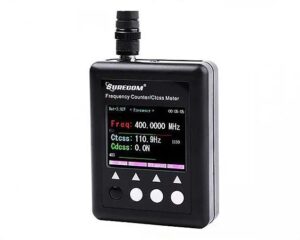 Surecom SF-401 PLUS Frequency Counter w/ CTCSS/DCS Decoder The SF-401 Plus is top of the line. It has all the standard features of the SF-103, including easy frequency Identification, CTCSS/DCS detection and decoding, and the ability to measure signal strength. However, it has a wider frequency range of 27Mhz-3000Mhz.

The SF-401 Plus also has the color TFT LCD display with adjustable backlight, four button control panel, and auto power off feature. It also has a digital mode for DMR radios. The SF 401 comes packaged with an antenna, USB charger cable, USB AC adapter and a belt clip. Price: $49.99