In the autumn of 2000, the FCC created the Multi-Use Radio Service, or MURS. As the name implies, it can be used for multiple applications, from..

In the autumn of 2000, the FCC created the Multi-Use Radio Service, or MURS. As the name implies, it can be used for multiple applications, from wireless home and office intercom systems to callboxes, public address systems, and portable handheld two way radios. Best of all, its available to use by almost anyone, whether for home or business, license free.

For much of its history, interest in MURS was limited to specific types of applications, partially because of its relative obscurity and the dearth of radios available that supported the service. Recently there has been growing interest in MURS. As a result, we've seen a slow but steady influx of type accepted MURS radios in the US marketplace. These products were limited to portable handheld MURS radios, such as the increasingly popular Wouxun KG-805M MURS radio.

In response to a growing demand for alternative options, one manufacturer just released a new radio that may usher in a whole new era for the Multi-Use Radio Service, the Wouxun KG-1000M Mobile MURS two way radio!

The KG-1000M is the first mobile MURS radio from Wouxun, and it hits the ground running out of the gate. It transmits and receives all 5 MURS channels at the full legal limit of 2 watts for maximum allowable power and performance. It also receives on several other bands, allowing you to hear traffic from other radio services such as FRS, GMRS, business, marine, airband and more. It includes a NOAA weather mode and a built-in FM radio. It even receives AM transmissions!

At first glance this multi-band functionality may not seem overly impressive on its own. After all, there are other mobile radios out there with these capabilities, such as the KG-UV920P-A and KG-UV980P. However, the KG-1000M is FCC type accepted for legal use on MURS, which makes it a total game changer for users of this service. And that's just the beginning. 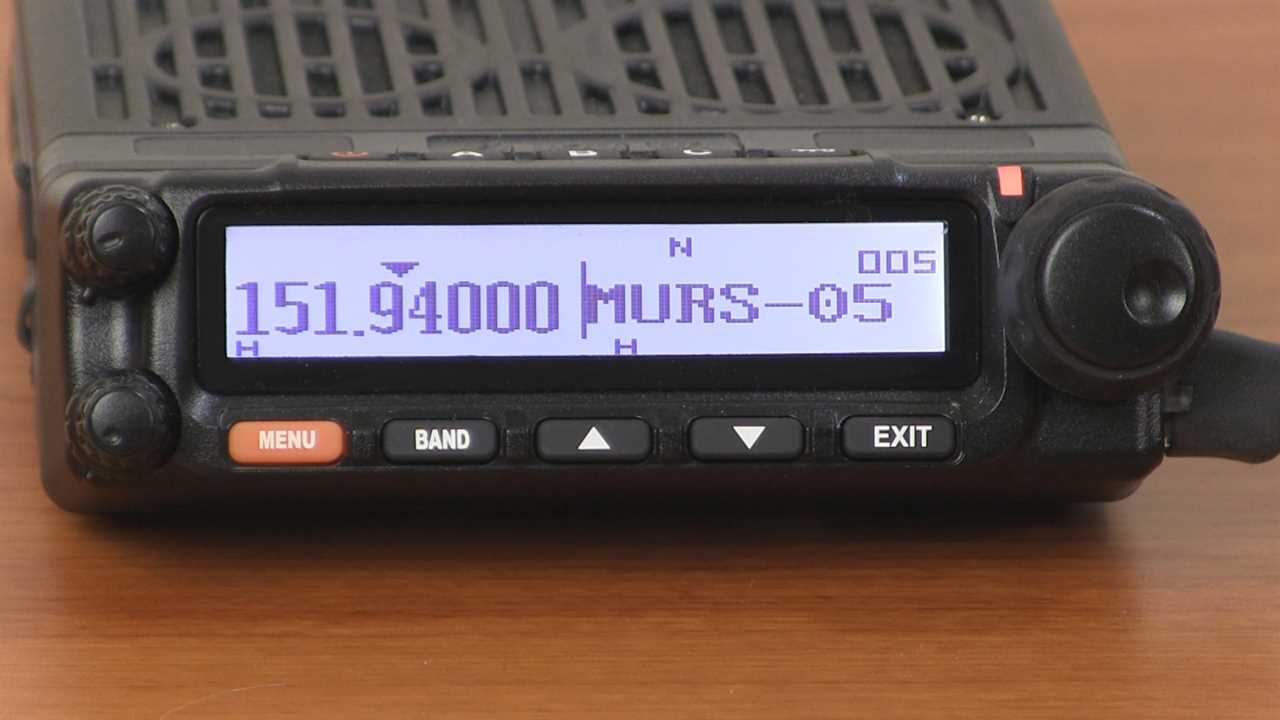 The KG-1000M is also capable of simultaneous dual mode operation, with A and B sides or areas, each capable of independent operation. This means it can receive on one area while transmitting on the other. You can even receive on both areas simultaneously. This is particularly useful when using the NOAA weather radio, as you can monitor the weather channels while scanning, transmitting or receiving on MURS. Essentially it is two mobile radios in one.

As a dedicated MURS radio alone, the KG-1000M is an extremely powerful device. In addition to the 5 primary MURS channels, it also has memory slots for additional custom programmed channels, for a total of 999 channels. But they aren't just for MURS. Any frequency from the wide RX range supported by the KG-1000M can be saved as a listen only channel. It also supports standard and non-standard CTCSS tones and DCS codes, plus the ability to split these tones and codes for transmit and receive. This means that you can leave the first 5 MURS channels straight, and customize them all with different tones and codes in hundreds of configurations on additional programmed channels as needed. Each channel can also be assigned a custom name with up to eight alphanumeric characters, so you can ID them instantly when switching channels.

Its powerful versatility doesn't end there. The Scan options provide even more. Of course, you can scan all 999 programmable channels, but you can also scan them with CTCSS tone and DCS code detection. The KG-1000M also features priority scanning and support for up to 10 Scan Groups, for even greater control over scans.

Then there is the Tone Scan. This feature scans for CTCSS tones and DCS codes. It allows you to discover the precise tone or code used on a specific channel, completely eliminating the guesswork of which one the sender is using.

Among its many other features, the KG-1000M has caller ID display, group, call, all call and selective calling, DTMF encoding and decoding, a compander, descrambler, wide and narrow bandwidth selectivity, and English voice prompts. Environment features include four power level settings, APO power management, minimum operating voltage adjustment and a built-in cooling fan in the back with adjustable control from the menu.

Of course, a dual mode radio wouldn't be very easy to manage without a dual display, and the KG-1000M has one. Like the equally powerful GMRS version of this series, the popular and highly rated KG-1000G, this dual display is detachable and includes both angled and flat switchboard panels in the kit, so you can mount it virtually anywhere in or around your dash while the base of the radio is neatly tucked away somewhere else within your vehicle. 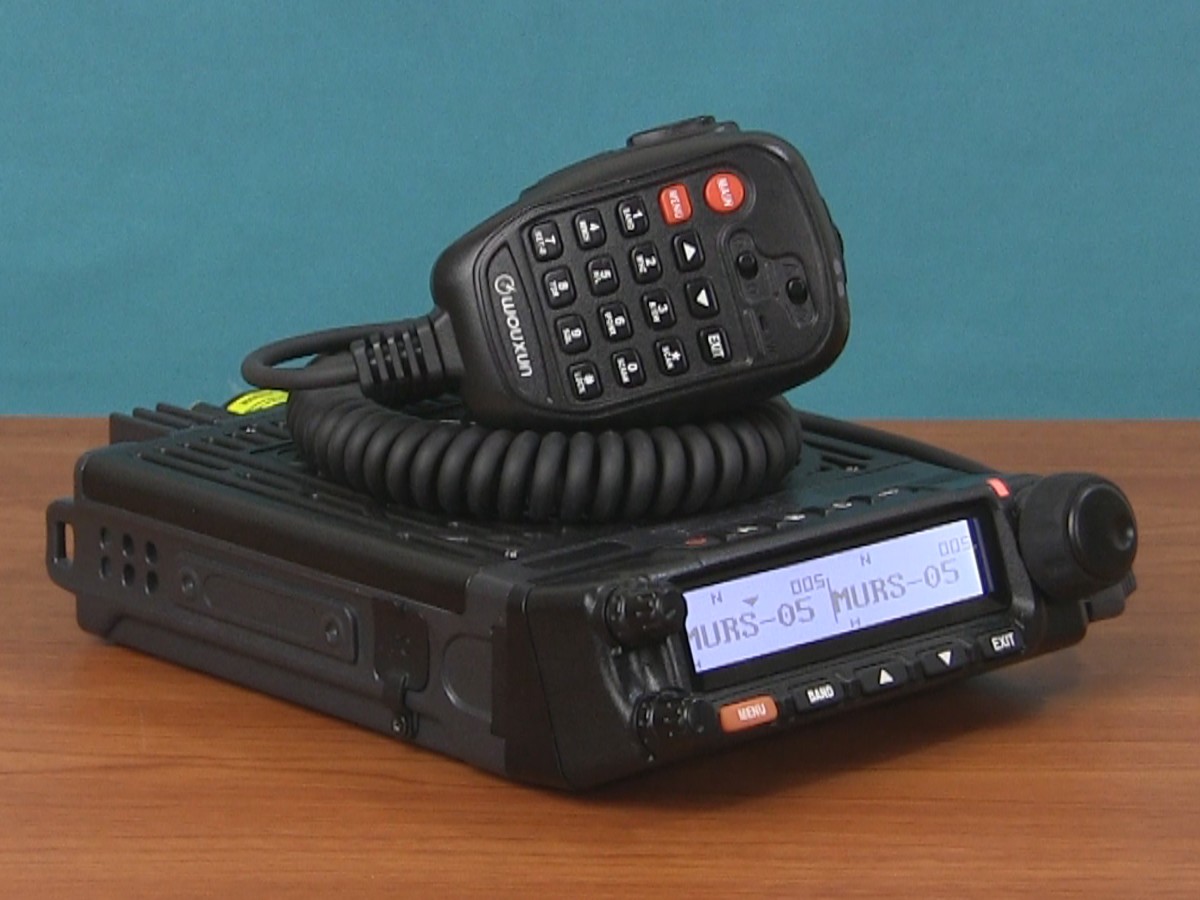 Actually, the KG-1000M is essentially the same radio as the KG-1000G, only it's for MURS instead of GMRS. Physically, it's nearly identical, right down to the control knobs, front panel keys and 3 color LED. The hand microphone is also the same, with speaker, TX/RX indicator LED and volume control. Like the 1000G, the hand mic allows nearly full control of radio including full menu access and on-the-fly programming directly from the radio. The KG-1000M has two speakers built into the base of the radio that can be controlled independently. The additional speaker in the hand microphone brings the total number of speakers to three.

For all the functionality that is core to this radio, there is yet one more feature that sets the KG-1000M apart from any other MURS radio on the market. Aside from three different Channel Modes, the KG-1000M also has Frequency Mode. That's right. In Frequency (VFO) Mode, you can type in or to tune directly to a specific frequency regardless of the frequency having been previously saved. This is a feature rarely, if ever seen on license-free radios, and never on one for MURS.

As for the price? For all it's advanced features and powerful functions, the KG-1000M is available for the same price as the GMRS model at $369.99.

The KG-1000M is the logical alternative for those who want more range and flexability than FRS offers for personal use, and without the need to purchase a license. It's also good choice for businesses that are already using MURS and need mobile radios, or are looking for VHF radios that are license-free.